At the the IEEE-SA December 2017 Standards Board Meeting, IEEE Std 802.3bs™-2017, which specifies 200 Gigabit and 400 Gigabit Ethernet operation, was ratified.  In moving Ethernet past 100 Gigabits per second, a whole new family of optical physical layer specifications (PHY) for 200GbE and 400GbE were defined, see Table 1 and Table 2. 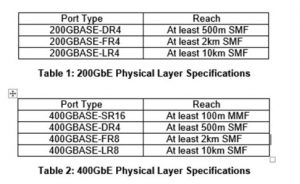 To enable these new rates of Ethernet, a new architecture was defined that included the inclusion of an “extender” sublayer to provide future proofing.  The IEEE P802.3bs Task Force decided to to develop electrical interfaces based on both 25Gb/s NRZ and 50Gb/s PAM4 signaling.  It also selected PAM4 signaling tf to achieve the effective 50 Gb/s and 100 Gb/s optical lane rates needed to develop the physical specifications noted in the above tables.

In the coming weeks the Ethernet Alliance will provide a series of blogs to provide an overview of the IEEE 802.3bs architecture that supports 200 GbE and 400 GbE, as well as all of the noted physical layer specifications.  Join us for this journey through the IEEE Std 802.3bs™-2017, the latest stop in Ethernet’s journey to higher speeds.